A big hello to all IRFCA members, both old, and new!

Today, I would like to share with all of you the history and current status of the West End Watch Co., of Leytron, Switzerland. At one time, West End watches were a household name in India, and I grew up in Mumbai (formerly Bombay) walking past the monolithic West End Watch Company building near the CST Station (formerly V.T.) in the fort area. My earliest memories of train travel on IR in the late seventies and eighties, through to the nineties, revolve around huge station clocks with the legend "West End Watch Co., Bombay and Calcutta" printed in bold across the face. My family used to own several West End watches that are still among our treasured family heirlooms.

From the latter part of the 19th century, until the advent of cheaper quartz clocks in the 1980s, West End Watches were the standard supplier of clocks and watches to the pre-independence Indian railway companies, notably:

Post-independence Indian Railways also used West End clocks to keep time, and these clocks from all periods of the railways in India can still be seen on many stations and sheds over the system (I found a really vintage one in full working order at the Calcutta Tram Company - CTC's - Gariahat tram depot, and newer examples from the 1980s the Central Railways Mumbai division stations, and over the South-Eastern railways networks. Doubtless many hundreds - or thousands - more exist over the vast Indian Railways network. They were also standard equipment for all the major government departments. 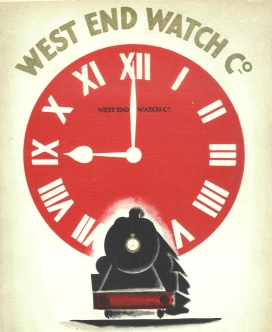 Last month, I was pleasantly surprised to discover excellent examples of the latest West End Watches prominently displayed at a mall in Doha, Qatar, where I live, and very pleased to discover that the company has been in the uninterrupted business of watch and clock manufacture for the past 125 years. I contacted the company to research their history, and got a very positive response. They are very proud of their Indian links, and also of their rich and often colourful history.

What follows is a brief history, extracted from the material that was sent to me from the West End Watch Co., and reproduced with their written permission.

For current details of the company, visit : http://www.westendwatchco.ch.

It all started when The West End, a trendy district of London, inspired its name to Mr Arnold Charpie, who was the Bombay representative of the firm Alcide Droz and Sons, a watch company established at Saint-Imier in Switzerland. Mr Charpie suggested that dials labelled "West End Watch Company" were sent to him. They proved to be a great success, and in 1886, Mr Amstutz and Mr Droz bought Mr Charpie's license for exploitation of the trademark. The West End brand was born.

The most popular model was Sowar, which is still manufactured today. In Hindi, "Sowar" means "warrior". However, it is not this reason alone that accounts for the image of the fearlessness and courage of the brand; it is said that Sir Thomas Edward Lawrence and his soldiers wore West End Watches. Thanks to his troops and to the Indian armies, the reputation of the brand spread from Tibet to Aden.

The West End Watch Company also owes its keen reputation to the sometimes hazardous itineraries necessary to be followed to deliver the watches from Switzerland to the Indies, then to Middle East, China, and Southeast Asia. At the dawn of the 20th century, the long journey from Switzerland to Bombay was full of adventure. It involved taking the consignments by train to Marseilles, then by ship across the Mediterranean Sea, the Suez Canal, the Red Sea and the Arabian Sea. Once checked, the watches were dispatched from Bombay throughout the Asian continent.

Delivering West End Watches has never been just a routine! During the Second World War, to avoid the Suez Canal and escape enemy submarines, some consignments were sent via Argentina and took one year to arrive! The anecdotes that relate the adventures of the travelers and the watches during that time are numerous; consignments torpedoed, or returned to Switzerland undamaged after coming up against closed borders. Once again, the reputation of the brand was carried wide and far by the English soldiers throughout Asia, from Burma to Japan passing through China.

Even today, West End Watches stand for adventure. For instance, when the lowest roads of the Himalayas are unsuitable for motor vehicles because of snow, deliveries don't stop, and are carried along on the back of yaks! For more than a century, the passion that drives all those associated with the design, manufacture and commercialization of West End Watches has in no way faltered. The passion also inspires, without any doubt, all those who like wearing watches so rich in history. 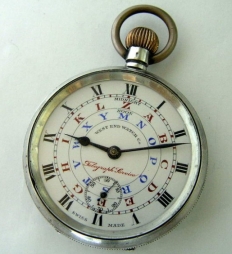 A West End vintage watch for railway and telegraph office use. Note the letters around the dial with 'Z' for midnight, 'A' for 1am, etc. - this alphabetic code is still used today for designating goods trains based on their time of departure.

Images reproduced by permission of the West End Watch Co.